skip to main | skip to sidebar

Prepare for this unprecedented Dabsheh

I heard this today and it killed me, so I wanted to share the love with the blogger world.
By the way, make sure that your ceiling is sturdy because something can fall of while you read this stupidity
here it goes...
Why can't a keyborad fly?
Because it doesn't have an F16 key. BEH BEH BEH BEH BEH BEH
*ASTEROIDS FALLING FROM THE SKY*
NOTE: DO NOT "NAKKES" ME. KEEP YOUR LAME COMMENTS TO YOURSELF BECAUSE NO ONE FORCED YOU TO READ THIS POST...I WARNED YOU
Posted by Khalid at 12:22 PM 4 comments:

The most annoying thing invented in the history of mankind

I recently got this email about how the Jews are doing to us what the Nazis did to them...How they are implying on Palestinians, what they believe was the injustice that was implied on them, and how they think that it's justice. This is all in pursuit of proving a wrong conspiracy, a chase for power, a chase for money. In the pictures below, the black and white parts are what Nazis did to them, and the coloured parts are obviously what the Jews did to us.

Women should be honored, not tortured and seeing their husbands behind fences.

No father should ever hold his dying son like that.

What could he have done to be humiliated and at gunpoint. 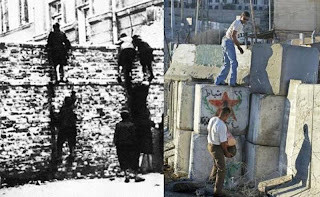 It's their land...The shouldn't have to climb a wall to get to the other side.

Why do children have to look so hopeless. No dreams, no education, no smiles, no future.

How is it that one cowardly soldier is holding all these people back?

Why would a child be crying behind bars when she should be living her childhood?

What did these children do to get killed? 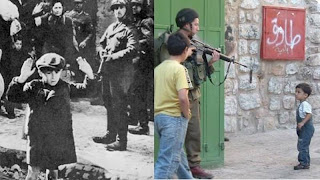 Holding up a gun on a child, thinking that he is actually brave.

Arabs should stand united against these cowards that,surprisingly, were able to dominate the Holy Land and take it from the used-to-be strong hands of the Arabs, which are now loosening their grips on Palestine. Let's tighten back the grip and take back what is rightfully ours.
Posted by Khalid at 3:47 AM 1 comment:

On TV and in newspapers

There's no doubt that the past few weeks have been ones of disaster to the whole Middle East. 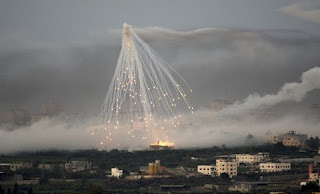 The highlight of all that would be the bombings in Ghaza and the disaster that's unfolding in the Holy Land. The 0nly good thing that i can think of is that the victims were Shuhada2 enshalla. And i can't help but to say that the people of Ghaza are the bravest that i have seen in my life as no one has surrendered to death or to the Israelis and they're keeping strong. So from Amman, i give my du3a2 that the Israelis will never have a victory on the Palestinians because whatever happens, Allah is with them. 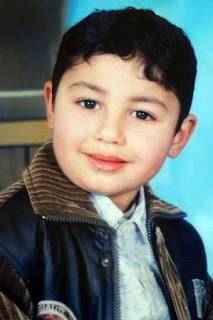 In other places around the news, that kid that was killed by his wretched cold-hearted teacher was really sad. Who has the heart to hit a boy so hard for something so stupid as not doing his homework? And the most disappointing part would be that he only got sentenced to prison for 6 years, which, in my view, is not enough. Something more should be done for someone who took a life. Allah y3een ahl el walad. 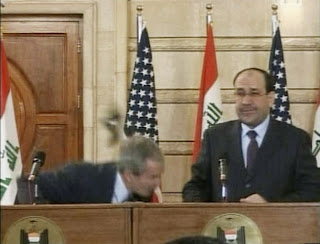 And on another page in the newspaper, we have that story about the journalist who threw the size 44 shoe at bush. The incident itself is quite amusing and gave me something to laugh about but i can't help but keep thinking what they're doing to that journalist in the place where he's being held. And how his family can't do anything about it. And what's going through their minds. But i guess that's a really minor story. Something happening to one person in comparison to what's happening to thousands in Ghaza, if you see what i mean...
Hehe look at that cheesy smile of Al-Maliky, and the blur that's the shoe...If only it had hit Bush.

On top of that, i'm out of books to read and will have to be looking for a new series to start. Any suggestions? 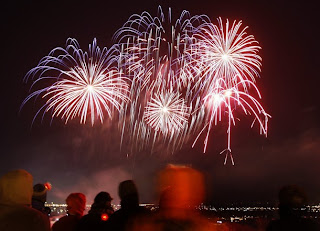 But on the bright side, at least we finished exams, except for the social studies exam which is just 2 pages from the notebook. :)
Posted by Khalid at 3:04 AM 1 comment:

9 wierd things about everyone

Percy Jackson and the Olympians

As much as an avid reader I am, I have never come across a book so gripping (other than Harry Potter of course). But still, it's one heck of a book. I mean seriously, how many books have you read that are as good as this one? Well let me make it a bit clearer to you.

Percy Jackson, a 12-year-old kid who lives in New York and goes to boarding school, always has problems. Trouble seems to follow him wherever he goes and he doesnt know that it's because that he is the son of one the Olympian gods (Ancient Greek gods like Zeus and his dudes). He is a demigod (one of his parents is human and the other is god) and monsters target demigods to feast on. Unfortunately, Percy learns this the hard way after battling his undercover math teacher who turns out to be a monster. After going to the only sanctuary on earth for demigods where no monsters are allowed, Percy has to train to become a true hero and stop a war waging between the gods.

The story takes place in modern-time America and brings ancient Greek culture to our daily lives. That's what makes the book so darn good. It's funny, amuzing, interesting and all the good adjectives you would use to describe a book. It's a definate 2 thumbs up and anyone who reads this post should read it 'cause you'll never regret it.
p.s. The first book of the series is The Lightening Theif. Just so you know.
Posted by Khalid at 2:15 PM 4 comments:

Prison Break Season 4, Episode 11 (I think)...NO SPOILERS IN THIS POST

This week, Prison Break was unique.  It was awsome, fantastic, smart, gripping, and all the good adjectives that Shakespeare made up.
And just because i can't give anyone a hand, i'll give the guys at FoxTV this post, because it's the most i could do, for making the best Prison Break episode that I have ever set eyes on.
Posted by Khalid at 6:53 AM 6 comments:

Yeah so this year, we're under the pressure of having external exams in May so we can be mdalla3een and whine to the administration on anything that bothers us.
So we told them that we needed to go on a trip to get releived of our "stress" (ya right!) and have thaw out a bit and so we decided to go the Dead Sea this Thursday.  But to our awesome luck, the Ministry of Education decided to make a new rule that says "no school trips after November 15th." so we're stuck in Amman this thursday with SCHOOL which makes it all the worse.
The same thing hapenned in grade 8 when we wanted to go to Aqaba, everything was ready when something bad (i can't remember what) hapenned.
It's just so frustrating
Posted by Khalid at 6:47 AM 2 comments:

Ever since i was young, i loved to draw and watch other people draw. Especially my mom, and especially when she used Adobe Photoshop for it, but i had never really learned how to use it. Until I was inspired by the amazing creations of my classmate/friend Khaled and so i thought, why not get ago at it. The first few tutorials i tried out were extremely hard since i didn't know a single thing. But then i got used to it. And below is the fruit of my/Khaled's tree; 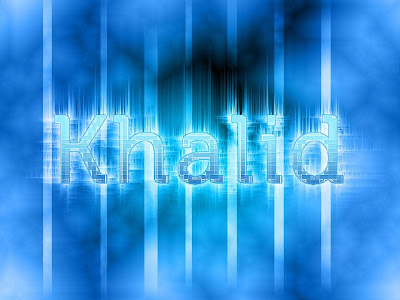 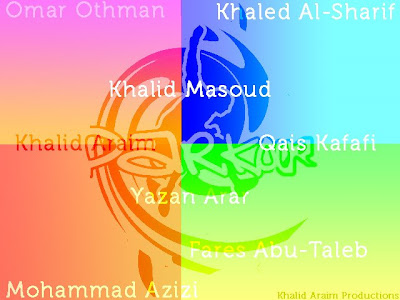 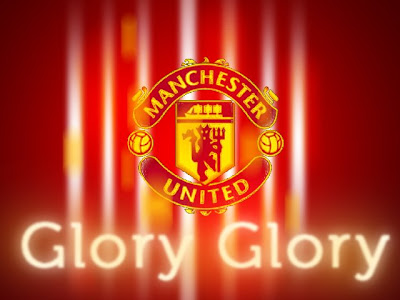 By the way Khaled, I'm expecting you to mention me in your blog.
Posted by Khalid at 5:12 PM 1 comment:

On Obama and the campaign 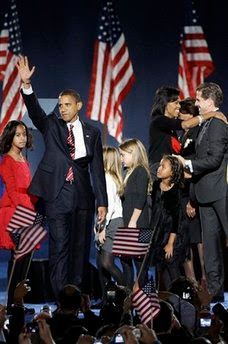 And so it was finally over yesterday with me very excited during the course of the past 48 hours to see who will become the next leader of the leading nation of the world.

And so to start off, see ya later Bush. You can go back to your cow and chicken barn in Texas and never show us your monkey and cruel face again. MA3 EL GAL3A!

As for myself, I have, let's say, supported Obama by not wanting McCain to win because Obama's face looks much more optimistic and friendly, whereas McCain looks grumpy which can pose a threat to the rest of the third world countries.

But who knows? Who knows if Obama is better than the one before him or if he'll help make the world a better place or stop the war in Iraq? People seem to be very hopeful after hearing that people are proposing that he'll become a muslim and just directly take all the troops out of Iraq. COME ON PEOPLE! COME TO YOUR SENSES! We're on earth here not mars. There's something called common sense. Someone can't just do that all at once.

So anyways, congratulations to everyone who voted for Obama for getting what you wanted and for having a kind-looking president as a leader for your country.

And congrats for Obama too for being the first African-American president of the USA. It's really a milestone in US history and hopefully this will put a stop to racism.
And congrats to me for finding a topic to blog about. 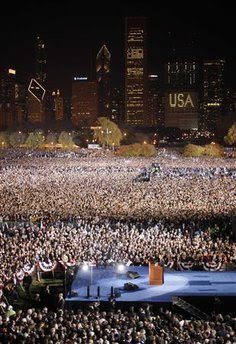 The Link to Qwaider Planet